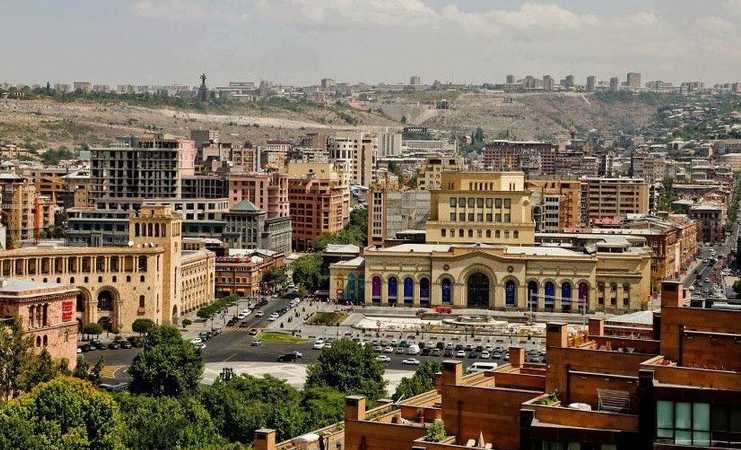 Yerevan is the capital of the Republic of Armenia.

Yerevan is the most populous and biggest city of Armenia and one of the oldest cities in the world.

The city is situated on the left-bank part of the Ararat valley on the Arax River. The population is 1,068 million people (as at 2014). The territory of the city – 223 square meters. Yerevan is political, economic, cultural and scientific center as well as essential transportation hub of the country. There are two airports, underground system and a railway station in the city.

Yerevan is situated in the northeast of the Ararat plain which is in the central part of Armenian Highland. Plateau, whereon the city is situated, is enclosed by the mountains – Mount Aragats north-eastward, Kanakersk Highland in the north and Mount Geghama in the east.

On the fifth year of his governance 782 BC the King Agrishti I founded the city-fortress of Erebuni – now Yerevan, which became one of the most important administrative and economic centers of the state.

Yerevan is a legal entity; it has the right of ownership and other property rights. Yerevan has its own budget and also the seal bearing the coat-of-arms of the Republic of Armenia with its name. Local self-government bases on principles stated in the Armenian Republic Act “Of Local Self-Government” which provided a uniform development of all administrative districts of Yerevan. The city bodies of local self-government are Yerevan Council of Elderly and Mayor of Yerevan.

The Yerevan Brandy Factory (YBF) is a leading producer of alcoholic drinks in Armenia.  In the city there are also chemical plant of synthetic rubber production “Nairit”, aluminum plant “ArmenAl”, the Yerevan TPP (550 ths KW/hours), the Kanaker and Yerevan stations of Sevano-Razdansky HPP cascade and the Yerevan HPP-2.

In Yerevan there are also supermarket chains “Sas”, “Yerevan-City”, “Vas”, “Best” and others. Household appliances can be sold in stores of Samsung, iStore, AG, Aray, ZigZag and other ones. There is also a local department of Microsoft Company.

At the moment there are such major healthcare institutions in Yerevan:

Culture is a spiritual criterion of any people; it is a chronographer of the whole nation. Culture is the major component of common values in humankind’s treasury, an indicator of intellectual potential of its founder.

Armenia is recognized in the world mainly by its creative thought. This is evidenced by the monuments and temples scattered throughout the country, the books held in Matenadaran, the libraries and museums in other countries, works of art and sculptures. The works of Armenian composers and national music play a special role in the spiritual development of mankind. Since the 19th century, Yerevan has become the main centre of Armenian culture, and after Armenia has acquired its dependence, the city has been a centre for development and progress.

In the territory of Yerevan there are 401 monuments of history and culture, 288 of which are state-owned and 113 are the property of Yerevan. They include 20 registered monuments of khachkar, 20 memorial fountains, 19 memorial complexes, 11 houses-museums, 6 churches and so on. 4 of the 57 museums situated in the city are subordinated to Yerevan's municipality — the Museum of the History of Yerevan, the Museum of Modern Art, Karen Demirchyan Museum and the Historical and Archaeological Museum. 3 of the 18 theatres of Yerevan are operated by the city adnistration (the Drama Theatre of the Gr. Gaplanyan, Young Spectators' Theatre and the Artistic Theatre "Mger Mkrtchyan").  There are Freedom Square and Opera and Ballet Theatre.

Since 2010, the Historical-Archaeological Reserve Museum Erebuni is also under the authority of Yerevan municipality. A programme has been developed to rehabilitate and reconstruct historical monuments for the full disclosure of historical, cultural and scientific values.

The center of the city's architectural ensemble is the Republic Square (1924-1958). The Square is formed with 5 buildings: the building of the National Historical Museum of Armenia, the building of the Government of Armenia with the country's main clocks on the tower, the central building of the state post office, the Hotel Marriott Armenia and the building of Ministry of Foreign Affairs and Energy. In front of the Museum of the Armenian history there are legendary "singing" fountains, at the same time changing their colors.

From the north to the square is adjoined with a recently constructed pedestrian North prospect connecting it to the territory of the Opera Theatre. The Theatre is surrounded by numerous squares and monuments, as well as the famous "Swan Lake" and the second largest square of Yerevan, the Square of France.

The city of Yerevan cooperates with more than 50 foreign cities and 8 international organizations, creating a broad contract field and implementing joint programmes.  Over the last period, the initiatives have been aimed at improving efficiency of cooperation with sister cities and partners of Yerevan and further expanding international relations.

The city has extended partnerships and established new relations with dozens of cities and organizations in Europe, Asia and the CIS, with the International Assembly of Capitals and Major Cities of CIS countries, the International Association of Mayors of French-speaking cities, Lighting Urban Community International (LUCI), the Association of European Cities (EUROCITIES), the Congress of local and regional authorities of the Council of Europe, the club of partner cities of Strasbourg, the World Heritage Cities Organization.

The capital of the Republic of Armenia Yerevan is one of the oldest cities in the world. Here there are age-old historical and cultural values. There are many museums, monuments and churches in Yerevan that attest to the high spiritual, cultural and scientific status of the city.

Yerevan, as the city that is stable and safe for business and investment and attractive to tourism, can offer a competitive tourism product and high-quality services in the international tourism market.

The aim of the government's tourism policy is to create a system that satisfies the needs of tourists, contributes to the growth of national income, the development of international relations, proportional development of regions and the improvement of living standards of the population. In order to do all this, it is necessary to ensure stable and sustainable development, to increase the number of tourists while increasing income from tourism industry by offering a higher quality tourism product.

The tourism product of Yerevan will be continuously presented at international exhibitions. It is very important for ensuring stable development in the sphere.