The emblem of Krasnodar 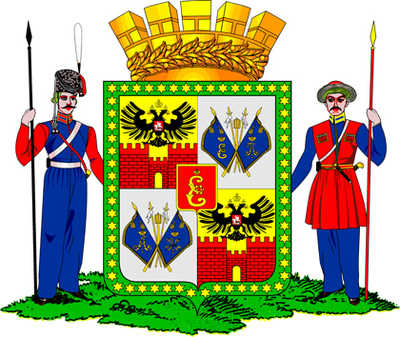 "In the four-parted scutcheon there is a dark red heart shield, bordered with a thin golden ribbon, in which there is crowned monogram of Catherine II of the same metal.

In the first and fourth parts in the golden field there is dark red fortress wall with through arc gate and two coming out towers; the black two-headed eagle crowned with three imperial crowns rest upon them; on his chest in dark red scutcheon the horseman in silver armory turned to the left on the horse made of the same metal strikes the black winged serpent with the spear.

In the second and third parts in the silver field there is the golden ataman club over crossed silver horse-tails on the golden poles with the point like the spear spike coming out of the crescent and above all there two crossed azure (blue) banners with the golden crowned monograms of Catherine II and the Emperor Paul I (second part) and the Emperors Alexander I and Nikolay I (third part).

The emblem of the city was created on the base of the historical Emblem of Yekaterinodar city highly established in 1849. The picture of the fortress symbolizes Yekaterinodar fortress, the open gates is the symbol of friendly character and openness of the city. The ataman club is the symbol of the Chernomorye capital, the residence of Ataman of the Black Sea Cossacks army; horse-tails are the symbols of the Black Sea Cossacks. The four crossed banners with the monograms of the Empress Catherine the Great, the Emperors Paul I, Alexander I, Nikolay I, granted to the Army at the moment of accepting the Emblem; they symbolize accomplishments of the Black Sea Army. The golden monogram of the Empress Catherine II represents that the city was named Yekaterinodar in her honor. 59 golden stars symbolize the number of the Cossacks villages (stanitsa) in the Black Sea Army in 1849.