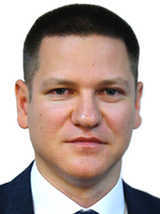 Chief of the Housing Department

Pavel M.Abramchik was born on February 7, 1984 in Krasnodar.

2006 — received his first degree graduating from the Faculty of Finance and Credit at Kuban State Agrarian University.

August 2018 — Deputy Director of the Department of Municipal Economy and Fuel and Energy Complex, Head of the Sanitation Department of the city administration of Krasnodar.