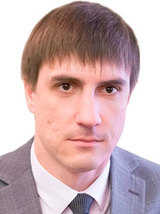 Direction of the construction department

2009 — graduated from the Kuban State Agrarian University with a degree in Land Reclamation and Protection.

2011 — started his municipal career as a specialist of the first category in the construction department in the city administration of Krasnodar, then was fired at his own
request in June 2017.

2015 — commended by the Head of the Administration (Governor) of the Krasnodar Region.

2018 — was awarded the Commemorative Medal for Merits.

2019 -was awarded a Certificate of Merits from the Krasnodar Territory Administration.