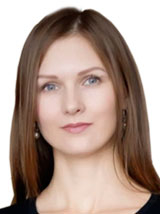 Anna v. Kosareva began her career in local government of Novorossiysk in 2007.

2012 — Chief of the Department for Public and Mass Media Relations of the Slavyansk district.

2013 — held various positions in the Department of Media, Press, TV and Radio Broadcasting and Mass Media of the Krasnodar Territory.

2015 — Chief of the Operational Information Department of the Krasnodar Territory Press Service Department.

Marital status: married, has a son.