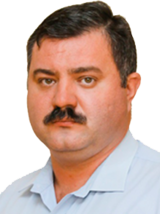 Aleksey S.Nekrasov was born on August 20, 1975 in Leninsk-Kuznetsky, Kemerovo region.

1980 — due to the relocation of his parents, came to live permanently in Krasnodar.

While studying at university started teaching as a teacher of mathematics in gymnasium No. 19 (Krasnodar)

1997 — deputy director for scientific and methodical work of gymnasium No. 19 of Krasnodar