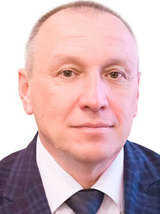 Chief of the Department of Trade and Consumer Services

2000 — graduated from the Rostov Law Institute of the Russian Ministry of Internal Affairs, specializing in Jurisprudence.

1985 — joined the internal affairs authorities of the Russian Federation, Main Directorate of the Ministry of Internal Affairs of Russia in Krasnodar Region;

2013 — Chief of the Legal Department of the Administration of Kalininsky District;