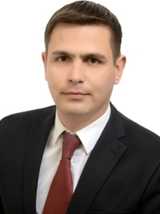 Head of the Prices and Tariffs Department

Graduated from Kuban State University, Faculty of Economics in 2006, specializing in Accounting, Analysis and Audit.

Dmitriy Y.Vasilyev began his career in 2002.

2002 — 2005 — Assistant to the Auditor in the State Unitary Enterprise «Centre for Audit and Control».

Dmitriy Y.Vasilyev was awarded a commemorative medal by the President of the Russian Federation for his significant contribution to the preparation and staging of the XXII Olympic Winter Games and XI Paralympic Winter Games 2014 in Sochi.