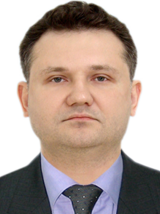 Deputy Mayor of Krasnodar, chief of the administrative department, coordinates work on organizational and personnel issues

Education: A graduate of the «Higher Border Military Political, Red Banner and October Revolution Orders School of the USSR KGB» in 1992 and the «Krasnodar Law Institute of the Russian Ministry of Internal Affairs» in 1997.

June 2014 г. — August 2014 — Head of the Department No. 1 of the Krasnodar Regional Major Repair Fund of Apartment Buildings (a non-profit organization).

Awards: Medal «Suvorov», Medal «For Participation in the Counterterrorist Operation», badge «For Service in Counterintelligence» III degree, commendations from the Director of the Federal Security Service of Russia.