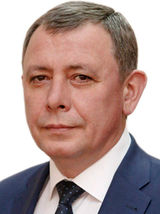 Head of the Department of Public Security and Legal Order, City Administration of Krasnodar

Vitaliy v. Kosenko was born on February 25 1969 in Krasnodar.

1986 — 1990 — was a cadet at the Krasnodar Higher Military School named after Army General S. M. Shtemenko.

1998 — graduated from the Regional Centre for Professional Development and Retraining at Kuban State University.

2009 — 2010 — chief of the department of organizational and information and analytical support of the municipal anti-terrorist commission of management on interaction with law enforcement bodies, affairs of the Cossacks and military personnel of the city administration of Krasnodar.

June 25, 2010 — chief of the department of cooperation with law enforcement authorities of the city administration of Krasnodar

June 1, 2017 — Director of the Department for Public Relations, Interaction with Law Enforcement Agencies, Cossacks and Military Personnel of the City Administration of Krasnodar

Medals: «For Outstanding Contribution to the Development of Kuban» I–III Degree.