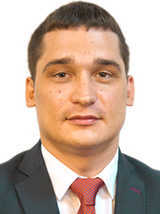 Chief of the Department of Control and Protocol

Date and place of birth:

2012 — graduated from the Southern Institute of Management, a non-state private educational institution of higher professional education, specializing in jurisprudence.

2017 — completed advanced training at the Russian Presidential Academy of National Economy and Public Administration, the programme «Peculiarities of work with chief state officials».

Dmitriy S.Medvedev started his career in 2010

2017 — awarded a commendation from the Head of the Administration (Governor) of the Krasnodar Region for conscientious work, high professionalism and impeccable and efficient municipal service.

2018 — awarded the Commemorative Medal of Merits