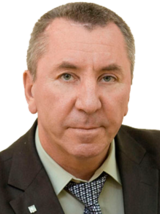 Head of the mobilization department

1979 — graduated from Tashkent Higher Tank Command School, qualifying as a platoon commander and an engineer for the operation of automotive and tractor machinery.

1983 — served in the Kuban in various positions, from tank company commander to deputy chief of the organizational and mobilization department of the army corps headquarters.

1998 — 2001 — served as deputy chief of the Group of Russian Forces in Transcaucasia in Tbilisi.

2001 — 2009 — Military Commissar of the Timashevsk and Kalininsk districts of the Krasnodar Territory.

Graduated by correspondence from the Kursk Institute of State and Municipal Service in 2003 with a degree in state and municipal management.

Yuriy A.Pashkovsky`s merits were marked by the Governor of Kuban: by medals «For Outstanding Contribution to the Development of Kuban» II and III degrees, by a personal watch from Alexander N.Tkachev, by Certificates of Merits of 2002, 2004, 2006, by three letters of thanks.

2005, 2006 and 2007 — the team, led by Yuriy A. Pashkovsky, was awarded the pennant of the Legislative Assembly of Krasnodar Region «Best Military Commissariat of the Krasnodar Region.

2008 — was awarded an Honorary Cup and Diploma for 2nd place in the Southern Federal District.

May 2009 — after retiring to the reserve, he has been working as chief of the mobilization department of the city administration of Krasnodar

War veteran, colonel in the reserve.

Marital status: married, has a son and daughter.