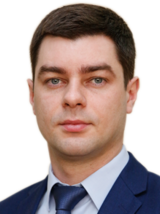 Head of the administration of the Prikubansky district

Alexander A.Zhuravlyov was born on October 17, 1987 in the village of Likhovskaya in the town of Kamensk, Rostov region.

2007 — graduated from the College of Business and Law

2012 — graduated from the All-Russian Distance Institute of Finance and Economics. Alexander A.Zhuravlyov is currently studying at the Faculty of Law at the South Institute of Management.

August 2016 — Head of the Department of Land and Property Relations at the Kubanmeliovodkhoz Department of the Russian Ministry of Agriculture.

September 2016 — Deputy Director of the Kubanmeliovodkhoz Department of the Russian Ministry of Agriculture, in charge of legal and property issues.

January 27, 2017 — chief of the department of municipal control of the city administration of Krasnodar

2017 — graduated from the Southern Institute of Management with a degree in State and Municipal Management.

October 23, 2018 — Head of Administration of the Prikubansky district of Krasnodar.