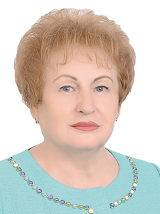 Deputy of the City Duma of Krasnodar, single-mandate constituency №32

Place of residence: Krasnodar Territory, the city of Krasnodar.

She was nominated by the electoral association “Krasnodar local party branch “UNITED RUSSIA””.

She is a member of the “UNITED RUSSIA” party.

Natalya I. Alsheva was born on July 3, 1956 in Medvedovskaya village of Timashevsky District, Krasnodar Territory.

She graduated from the Russian State University of Trade and Economics with a degree in commerce. She is a candidate of sciences.
She began her career at the age of 16, working at city enterprises. She began working in public catering in 1982, and in 1990, she headed a school food production facility.

By the Decree of the President of the Russian Federation, she was awarded the honorary title "Honoured Trade Worker of the Russian Federation" in 2003. By resolution of the head of Krasnodar Territory Administration she was awarded the title “Honoured Trade Worker of Kuban” in 1998. She was awarded for services in developing the trade network, improving the forms and methods of trade, ensuring a high culture of trade services to the population and staff training. She was repeatedly awarded the medal “For Outstanding Contribution to the Development of Kuban” (2001, 2006), by the decision of the City Duma of Krasnodar in 2011 - the medal “For Merits”, the anniversary medal of the Federation of Independent Trade Unions of Russia (2004). She was awarded the Krasnodar Region Administration's Quality Prize in 2010, she was also awarded by the Interregional Association of Russian Chefs (2007). She was also awarded the Diploma of the Ministry of Industry and Trade of the Russian Federation in 2012. She is the winner of the action of public recognition “Guardians of Krasnodar” in the nomination "For Active Contribution to the City Development" (2012).

She is a deputy of the City Duma of Krasnodar of the fourth, fifth and sixth convocations, chairman of the Committee on Economics, Trade, Agriculture, Entrepreneurship, Investment Policy and Information.

She was elected from single-mandate constituency №32.