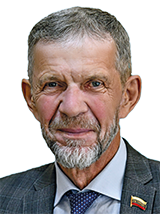 He is a member of the "UNITED RUSSIA" party.

He was born on November 22, 1953 in the village of Krasnovo, Ukhtomsky District, Moscow Region. The family moved to the Kuban in 1954.
After leaving school he worked in the sphere of construction.

From 1972 till 1975 he served in the Navy. After demobilization, Vladimir D. Bagmut worked at the Krasnodar worsted textile mill and for twenty years he has worked his way up from assistant master to shift supervisor.

He graduated from Krasnodar College of Light Industry in 1979.

He holds the title “Honoured Trade Worker of Kuban”, is awarded the Medal “For Merits”, has Commendations from the Head of the Krasnodar Territory Administration for many years of hard work and for taking care of children without parental care.

Since 2008 he has been twice elected deputy of the City Duma of Krasnodar of the fourth and fifth convocations in the single-mandate electoral district № 21.
He is a member of the Local Political Council of Krasnodar local branch of the “UNITED RUSSIA” party.

Vladimir D. Bagmut has higher education, in 2011 he graduated from the Maikop State Technological University with the qualification “Engineer”.
His family includes five children and four grandchildren.

He was elected elected in the single-mandate constituency №14.