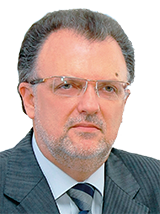 He was nominated by the electoral association “Krasnodar local branch of the party UNITED RUSSIA”.

He graduated from the comprehensive school in 1971.

· From 1979 to 1985, studied at the Department of History of the Kuban State University (correspondence department). Graduated from the University with qualification of the teacher of history and social studies.

· Since 1988 works in the system of public education of the city of Krasnodar.

For outstanding service in pedagogical and educational activities he was awarded the Badge of Honour of the Ministry of Education of the Russian Federation “Excellent Teacher”, the medal “For the outstanding contribution to the development of Kuban” (III degree). He has been awarded the honorary title of Honoured Teacher of Kuban. The name of Vladimir A. Belousov is entered in the Golden Book of Krasnodar Education for special merits and a considerable contribution to the development of system of education. He was awarded the title “Honorary Citizen of Krasnodar”.

He was elected in single-mandate constituency №6.