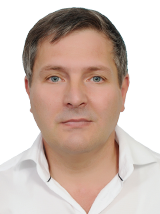 Place of residence: Krasnodar Region, the city of Krasnodar,

He was nominated by the electoral association “Krasnodar local branch of the UNITED RUSSIA party”.

Member of the “UNITED RUSSIA” party.

Since 2006 till present time he is the General Director of Globus Ltd.

In March 2010 he was first elected to the Council of the Municipality of Dinskoy District. He was nominated by electoral association “Dinskoy local party branch “UNITED RUSSIA””.

Since May, 17th, 2011 he is the deputy Secretary of the local party department Dinskoy "UNITED RUSSIA" on propaganda work.

He was elected from single-mandate constituency №15.