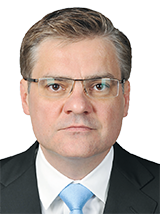 He was born on August 8, 1961. After finishing school he entered Krasnodar Technical School of Electronic Instrument Engineering, from which he graduated with honors.

He was elected from constituency No. 37.