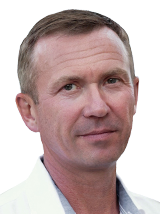 He is a member of the «UNITED RUSSIA» party.

He was born on February 18, 1966 in Proletarsk of the Rostov Region in a family of builders.

In 1969 he moved with his family to Krasnodar. In 1973 he went to the first class of the secondary school № 69, graduated with a gold medal.

In 1983 he entered the Krasnodar higher Military School named after Army General , from which he graduated in 1987 with a degree in «Command Telecommunications» with the qualification of «Engineer in the Operation of Telecommunications».

He served in the Armed Forces, was awarded the medal «For Distinction in Military Service» (II degree). In 2003 he retired from the reserve with the rank of lieutenant colonel.

He graduated from the State University of Management (Moscow) in 2004, specializing in State and Municipal Management.

In 2005, 2010 and 2015 he was elected Deputy of the Krasnodar City Duma, where he is Deputy Chairman of the Committee on Law and Order and Legal Protection of Citizens.

In 2013 he defended his thesis for the degree of Candidate of Political Sciences.

He is married, has three children.

He was elected in  constituency № 13.