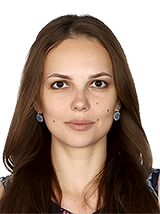 Place of birth: the city of Krasnodar

She has a daughter.

She was elected in the municipal constituency on the list of the United Russia party.