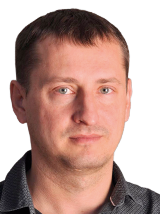 He has been a member of the Communist Party of the Russian Federation since 1999.

He was born on  in the village of Starominskaya.

After graduation worked as a Youth Coordinator of the Youth Committee of the Krasnodar region Administration.

2001–2002 — served in the army as a Railway Troops Platoon Commander with the rank of Second Lieutenant.

After discharge in the reserve worked:

— Foreman in the defectoscopy department of the Krasnodar division of Russian Railways.

— Manager of the Santa Ltd shop in Krasnodar

-Head of the Procurement Department at Diol Trading House, Krasnodar.

Now he is an instructor of organizational and party work of the Krasnodar Regional Branch of the CPRF.

He was elected in  constituency No. 5.