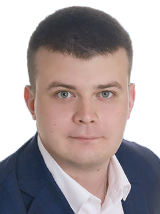 Place of birth: Baku, the Republic of Azerbaijan.

In 2014 he graduated with honours from the Kuban State Agrarian University with a degree in law.

After graduation he was drafted into the Armed Forces of the Russian Federation. He is a sergeant in the reserve.

From 2011 to 2013 he was a lawyer in the regional branch of the Association of Young Entrepreneurs of Russia.

In 2015 served as Deputy Director of Legal Affairs at StroyTechExpert Limited Liability Company.

From 2017 to 2019, he was Deputy General Director for Legal Affairs at Parks, Investment, Tourism Municipal Unitary Enterprise.

Since 2016 he has been the chairman of the Krasnodar Territory Council of Young Deputies Committee on Property and Land Relations.

Married, has a daughter.

He was elected in the constituency № 31.