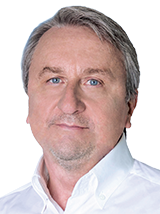 Deputy of the City Duma of Krasnodar, single-mandate constituency №1

He was born on August 8, 1961 in the village of Romachinskoye in the Gorki region.

Place of residence: the city of Krasnodar.

He has two degrees:

Candidate of Sciences (Ph. D.) in Economics and Doctor of Biology.

He has experience in commercial structures and public authorities, worked at such companies as «Kolskaya Mining and Metallurgical Company» and «Norilsk Nickel».

From 2003 to 2009, he was Deputy and First Deputy Head of the Administration (Governor) of the Krasnodar Region.

He is an «Honoured Economist of the Kuban».

He was elected in  constituency № 1.