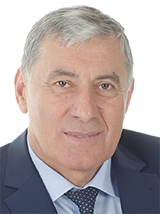 In 1974 he graduated from school. In 1979 he graduated with honors from Kuban Order of the Red Banner of Labor Agricultural Institute («Agricultural Construction») with the qualification of «Civil Engineer». In the same year, he underwent military training at the educational institution.

All labour activity is connected with construction. He went all the way from an engineer to the general director.

In 2007 he defended got PhD in Economics.

He is the winner of the Best Head of the Russian Construction Industry 2010 award, and received a commemorative medal «For Contribution to Construction».

In 2015 he was elected Chairman of the Board of Krasnodar Builders, supported by over 500 construction organizations.

He was also awarded a Certificate of Merit of the Municipality of Krasnodar.

He is married, has two children — a son and a daughter.

He was elected in the constituency № 7.