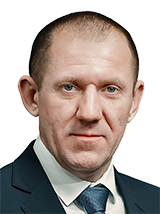 Deputy of the City Duma of Krasnodar (single-mandate constituency №12)

He was born in 1979 in Krasnodar. In 1994 he graduated from secondary school № 7. In 1999 he received a diploma of Pashkovsky Agricultural College, specialty: Construction and Operation of Buildings and Structures.

From 2001 to 2009 he received two degrees: «Industrial and Civil Construction», «Economics and Management in Business».

He began his career in 1996. In 2000 he started to work in OJSC «Kuban Airlines» as Head of Repair and Construction Department. He worked his way up from supervisor to manager. From 2004 to 2015 held managerial positions at the enterprises of the city and the region. Since 2015 he has been working at YugStroyImperial LLC. For his work he has received certificates and commendations from the Governor of the Kuban and the Chairman of the Legislative Assembly of the Krasnodar Territory. In 2020 he was awarded the honorary title «Honoured Builder of Kuban».

He is married, has a daughter.

He was elected in  electoral district № 12.