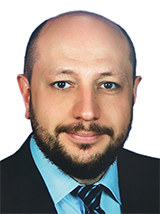 He was nominated by the electoral association «Krasnodar local branch of the «UNITED RUSSIA» party.

From 2004 he began his career as an economist of the stud farm «Krasnodar» of the Kuban State Agrarian University.

In 2007 he got his PhD in Economics: Economics, Organization and Management of Enterprises, Industries, Complexes — Agribusiness and Agriculture and started teaching at Kuban State Agricultural University, combining it with his main job.

Since 2013 he has been a  associate professor in the Department of Finance at KubGAU.

He has an official address: nosalenko@krd.ru.

He was elected in the constituency № 28.