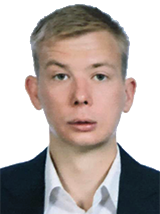 Deputy of the City Duma of Krasnodar (Municipal constituency)

He was born on June 2, 1997 in Krasnodar, studied at the Gymnasium № 23 specializing in English and German. He is fluent in English. He graduated from the college of the Russian State University of Justice with honours.

He graduated with honours from the Russian State University of Justice with a degree in Jurisprudence.

He served in the army, was demobilized at the rank of Junior Sergeant.

He worked as a specialist in the Civil Litigation Support Department of the Krasnodar Regional Court.

He is a member of the «UNITED RUSSIA» party.

He was elected in the municipal constituency on the list of the UNITED RUSSIA party.