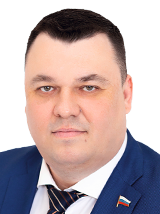 Place of residence: Krasnodar Territory, the city of Krasnodar.

He is a member of the Party «UNITED RUSSIA».

He graduated from Krasnodar Secondary School № 28 in 1990.
Military and legal education:

He is married, has a daughter.

He was elected in  constituency № 39.