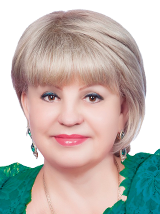 He was born in 1955 in Krasnoarmeyskaya village.

She began her career at the Oilseeds Research Institute, and then continued at the plant № 4.

In 2010 she was elected from the Kruglikovsky constituency № 22 as deputy of the Duma of Krasnodar of the fifth convocation, was the Deputy Chairman of the Duma Committee on Housing and Communal Services, Fuel and Energy Complex.

She has two degrees, graduated from Kuban State University with a master’s degree.

He was elected in  constituency № 26.