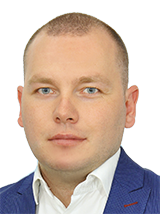 In May 2011 he was appointed Artistic Director, Acting Director of the municipal budgetary institution of the city of Krasnodar «City House of Culture № 1 of the Central Intercity District of Krasnodar».

Since 2013 he has been a member of the political party «United Russia», secretary of the primary branch № 21–60.

Since 2018 he has been heading the board of directors of cultural and leisure institutions in Krasnodar.

For his contribution to the development of culture was included in the «Golden Book of Culture of the city of Krasnodar» in 2013, 2018 and 2019.

He has letters of commendation and certificates of merits from the Mayor of Krasnodar and the City Duma.

He was elected in the constituency № 17.