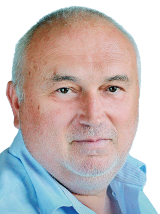 From 1986 to 1991, he studied clinical residency program and postgraduate course at the Kuban State Red Army Medical Institute.

From 1991 to 2002, he studied in Kuban Medical Institute, specializing in General Medicine.

From 1991 to 2002, he had been working in Krasnodar Regional Heart Centre, had worked his way from a cardiac surgeon to the chief doctor.

From 1995 to 2005, he practiced at the Department of Cardiovascular Surgery of the Faculty of Postgraduate Medical Training of the Kuban State Medical Academy.

From 2005, he had been working as Deputy Director of «Firma Lavren» Ltd.

Since 2005, he has been working as Deputy Director of the Municipal Institution «Olympus Sports Palace».

In 2007–2008, he received professional retraining in Federal State Educational Institution of Higher Professional Education «North Caucasus Academy of Public Administration» on the program «State and Municipal Management».
He has a PhD in medicine.

Since 2005 he has been elected three times to the Krasnodar City Duma of the fourth, fifth and sixth convocations.

He was elected in the constituency № 2.