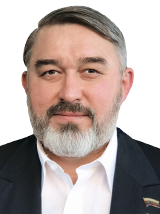 He has two degree:

In 1988 he founded the sports club «Samson». At present, he is the Director of MUE Physical Training and Sports Club «Samson», President of Krasnodar Regional Bodybuilding Federation «Samson», of the Russian Federation of Bodybuilding and Fitness for the Southern Federal District.

He holds the titles:

— «Honoured Worker of Physical Culture and Sport of Kuban».

He was awarded the Badge of Honour «For Services in Development of Physical Culture and Sport» by the Russian State Committee for Sports, as well as the Commemorative Medal «For Services» of the Municipality of Krasnodar.

He was elected in  constituency № 3