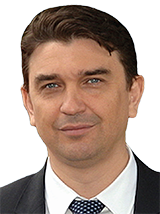 Deputy of the City Duma of Krasnodar, single-mandate electoral district #4

In 1995 he received a degree in economics from Kuban State Technological University.

In 1998 he received a degree in law from Kuban State Agrarian University.

In 1994 he began his career at «Krasnodargorgaz» as an economist, then worked as a legal advisor, head of the Legal Department, Deputy General Director for Legal and Property Affairs, since 2006 — General Director.

Since 2010 he has been a member of the United Russia party.

In 2010 and 2015 he was elected Deputy of the Krasnodar City Duma in the fifth and sixth convocation ( constituency № 4).

He was elected in  constituency № 4