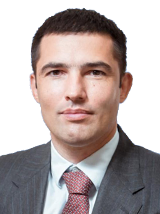 Primary place of employment: From April 2016 up to the present he has been the General Director of LLC «KRASNODARCHAY» («Krasnodar Tea»), chairman of the agricultural supply and marketing cooperative and processor «Krasnodar Tea», («The first tea cooperative of Russia»)

He graduated from the Academy of Law and Administration of the Ministry of Justice of the Russian Federation in 2001 (Ryazan); Qualification: Psychologist;
From October 2005 to June 2006 he took professional retraining in Kuban State University program «Finance and Credit», to carry out professional activities in the field of economics and financial management of enterprises and organizations;

He got master`s degree in 2019 in Kuban State Agrarian University. Specialty: «State and municipal management» (diploma with honours).

He was awarded a commendation from the Minister of Agriculture Alexander N. Tkachev for his contribution to the development of agriculture; a commendation from the Chairman of the Legislative Assembly of Krasnodar Region Yuriy A. Burlachko for his great contribution to the development of small and businesses in Krasnodar Region.

He was elected for constituency № 23.