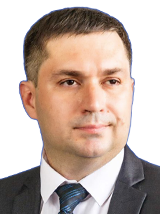 Deputy of the City Duma of Krasnodar (municipal constituency)

He was born in 1979 in the family of an engineer and a teacher.

He graduated from the Faculty of Civil Engineering of Kuban State Technological University majoring in «Industrial and Civil Construction», simultaneously graduated with honors from Kuban Institute of International Business and Management with a degree in «Finance and Credit» in 2001.

He got PhD. in Economics, has been engaged in scientific activities in the field of management of national economy since 2004, is the of 2 books and 11 scientific articles on the subject of research.

Gennadiy S. Ufimtsev is a member of the Expert Advisory Council of the Legislative Assembly of the Krasnodar Region Committee on Property and Land Relations.

He is a member of the bureau of the regional branch of the political party «A Just Russia» in Krasnodar Region.

Elected in the municipal constituency on the list of the «A Just Russia» party.