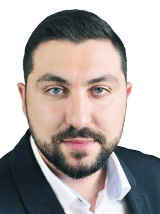 He graduated from the Kuban State University in 2007, specializing in journalism.

He worked in the football club "Kuban", the newspaper "Komsomolskaya Pravda", auto holding "Klyuchavto" and in the Administration of the municipality of the city of Krasnodar as assistant to the Mayor.

He is the recipient of the "Golden Pen of Kuban" award, the author and presenter of the television programme "Kuban Olympics".

He was elected for single-mandate constituency №36.