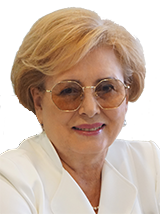 Place of residence: Krasnodar region, the city of Krasnodar.

She was nominated by electoral association “Krasnodar local branch of the political party “UNITED RUSSIA””.

Vera F. Galushko was born in Kurganinsk in a large family.

She began her career in 1966 as a worker at a sugar mill.

She occupied the position of Deputy Head of the Krasnodar Territory Administration from 1997 to 2001.

She was the Chairman of the Regional Electoral Commission from 20 January 2001 to 13 October 2010.

Vera F. Galushko has higher education in law and a scientific degree of Candidate of Sciences in Law. Her dissertation is on improving the work of electoral commissions.

She is a Hero of Labour of Kuban. She was awarded the Medal of the Order "For Merit to the Fatherland", of the First and Second Degrees, the Order of Honour, and the Commemorative Medal "For Outstanding Contribution to the Development of Kuban" of the First Degree.

Vera F. Galushko has a daughter, who works as a doctor, two grandchildren.