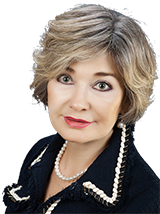 She was born on 03.05.1963 in Timashevsk of Krasnodar Territory in a family of employees.

She studied at secondary school №15 in Timashyovskiy district from 1970 till 1980. From 1980 to 1986 received education in the Kuban Red Army Medical Institute specializing in "Medicine".

She was allocated to the Regional Centre for Addiction Medicine in 1986, where she has worked to the present time. She had been working as a psychiatrist and drug treatment specialist for 20 years, from 2007 was head of the dispensary department, from 2009 to the present time has been working as a deputy chief physician for outpatient and expert work of the state budget health institution "Drug Dispensary" of the Ministry of Health of the Krasnodar region.

Galina A. Ermakova, having the highest qualification category in the specialty "Psychiatry and Addictology" is the chief non-staff expert in addictology of the health department of Krasnodar. She has been working in health care for more than 30 years.

She received a law degree from the Russian Academy of Justice in 2007.

She graduated from Kuban State University with a degree in Psychology in 2015.

She received additional professional education "Arbitration Court Activity Organization. Pre-trial settlement of disputes in healthcare" at the Institute of Postgraduate Medical Education in 2015.

Galina A. Ermakova is a candidate of medical sciences, an associate professor at the Department of Psychiatry of the Faculty of Professional Development and Teaching Staff of Kuban State Medical University, since 2014 a doctoral student at the Serbsky State Scientific Center for Social and Forensic Psychiatry in the field of "Addictology", she is the author of numerous articles in regional and federal editions. She has repeatedly taken part with presentations and abstracts at all-Russian scientific and practical conferences, actively promoting healthy lifestyle.

She has the titles "Honoured Doctor of the Russian Federation" and "Honoured Health Worker of Kuban", is a member of the Krasnodar Anti-Drug Commission, has been repeatedly awarded certificates of merit by the Ministry of Health of the Krasnodar Region "For services in health care and many years of conscientious work" and honorary diplomas of the city administration of Krasnodar and the City Duma, Honorary Certificates and Letters of Thanks of employees of regional management of the Federal Drug Control Service of Russia on Krasnodar territory, has the jubilee medal and a memorial sign "For many years of assistance to law enforcement agencies", is awarded by a memorable medal "For Merits" of the city administration of Krasnodar.

She is married, has a son.

Elected in the municipal constituency on the list of the United Russia party.