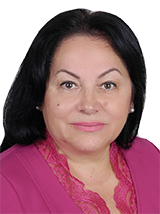 Member of the “UNITED RUSSIA” party.

She was born on April 24, 1959 in Leningradskaya village (Krasnodar Territory).

She began her career in 1979 in the House of Culture of Leningradskaya village.

She enrolled at the Krasnodar State Institute of Culture in 1979. After graduation, she was engaged in creative work at the Palace of Culture and Sports.

From 1986, she had been heading the children's section of the House of Culture of the "Kuban" training farm in Elizavetinskaya village.

She was appointed the director of the Municipal Institution "Center for Social Services “Prikubanskiy”” in 2004.

She was awarded diplomas of the Ministry of Health and Social Development of the Russian Federation, of the municipality of Krasnodar, a letter of thanks of the Legislative Assembly of Krasnodar Region, has the title of "Veteran of Labour".