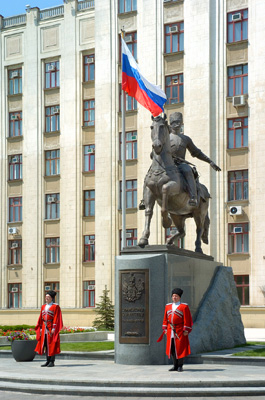 Administrative center of Krasnodar Region, the city of Krasnodar was founded by Cossacks in 1793. Now it is the biggest industrial, transport, commercial, scientific and cultural center of the Russian South.

Krasnodar is situated on Kuban Azov (near Kuban) lowland on the right side of the Kuban river bank in 1539 km down south from Moscow. From northeast Krasnodar city borders with Dinskoy district, from the west with Krasnoarmeysk district of Krasnodar Region, from the south along the water area of Kuban river with Takhtamukay disctrict of Adygea Republic, from the east – with Ust-Labinsk district of Krasnodar Region. Geographical coordinates of the historical center: latitude 45° 2' North and longitude 39° East. The topography of the area is steppe, climate – mild continental.

The city has favourable economy-geographic position in the Southern Federal District; it’s situated on the most important transport highways connecting the center of Russia with the Black Sea and the Azov Sea ports and also with the resort areas of the Black Sea coast of the Caucasus.

At the south eastern part of Krasnodar there is Kuban reservoir that was built in 1973 to secure the implementation of manufacturing and land-reclamation works.

Municipal formation Krasnodar City is the biggest transport node where all kinds of vehicles take place: air, railway, river, bus, city transport (trolleybus, tram). There are regular and chart flights from the city airport to the cities of Russia, neighboring and distant foreign countries. There are 3 railway stations. The federal highway M4 ‘Don’ passes through Krasnodar and connects the city with Azov and Black Sea coast and Rostov Region.

On Kuban River there is navigation of river transport into the water area of Azov Sea.

Modern Krasnodar is an industrial center. There are about 47 thousand people working in 130 big, medium-sized as well as small industrial enterprises or more than 21 per cent of entire employable population of the city. The leading role in overall structure of industrial production is played by processing industry, then the production and distribution of gas and water. The extraction is third most important area of industry.  Krasnodar’s industrial enterprises devote special attention to the development and introduction of new technologies, including energy saving solutions that allow entering a new phase of industrial development. 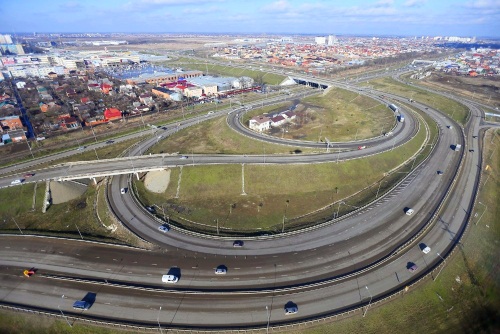 For the fifth time under special project “10 most progressive megapolises of Russia” experts of Russian Reporter Magazine call Krasnodar the most progressive Russian city on basis of social and economic development indicators and results of surveys. The rating includes over 20 Russian cities with population over 600 thousand people.

Based on a research carried out by specialists of Superjob.ru web-portal the capital of Kuban is ranked second according to indicator of welfare and happiness of its residents.

In December 2014 rating agency Expert RA has confirmed Krasnodar’s credit rating at the level A+ “Very high level of credit worthiness”. The outlook on rating is stable.

The capital of Kuban is universally recognized as scientific, educational and cultural center. One of priorities of Krasnodar’s representative and executive authorities is the maintaining and strengthening of the population health through disease prevention, formation of healthy lifestyle, improvement of a medical support availability and quality.

In Krasnodar there are Russian center of functional surgery on gastroenterology, the regional homoeopathic center, the Russian first Center of chest surgery. On base of Krasnodar municipal diagnostic and treatment association the complex of centers of specialized course ambulatory treatment (SKAT) was created.

Krasnodar is one of leaders of Southern Russia in the development of sport and physical culture. There are multifunctional sporting complex “Basket Hall” for 7500 seats, sports center “Olympus” for 3000 seats and the biggest at the territory of South of Russia ice palace.

Due to special geopolitical situation of Krasnodar Region in Southern Russia the city of Krasnodar has become one of the most significant cities of the Southern Federal District. This is yearly confirmed by the results of social and economic development.