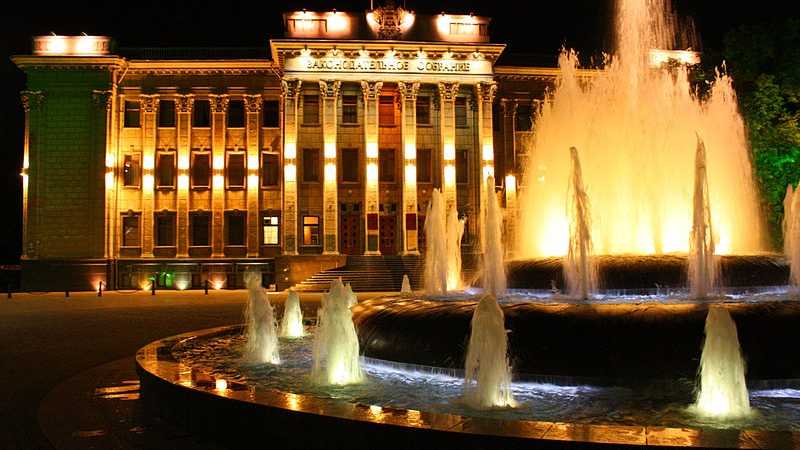 Krasnodar city is situated on Kuban-Azov (Prikubanskaya) lowland on the right side of the Kuban river bank in 1539 km to the south from Moscow. In the northeast Krasnodar city borders with Dinskoy district, in the west with Krasnoarmeysk district of the Krasnodar region, in the south along the water area of Kuban river with Takhtamukay disctrict of Adygea Republic and in the east – with Ust-Labinsk district of the Krasnodar region. Geographical coordinates of the historical center: 45° 2' of northern latitude and 39 ° of eastern longitude.

Relief of the region is a steppe one, climate – mild continental.

The city has profitable economical-geographical location in Southern Federal District; it is situated on the most important transport highways connecting the center of Russia with ports of Black and Azov Seas and also with the resort areas of the Black Sea coast in Caucasus.

At the south eastern part of Krasnodar there is Kuban reservoir that was built in 1973 year for provision of manufacturing and melioration measures.

The territory within the municipal formation is 841, 4 square km or 1,1 per cent of Krasnodar region area. The city is separated into four urban districts: West, Karasunskiy, Prikubanskiy and Central. There are 5 village districts and 29 villages within Krasnodar city municipal formation.

Krasnodar city municipal formation is the biggest transportation hub, which concerns all kinds of vehicles: air, railway, river, bus, urban electric transport (trolleybus, tram). There are regular and charter flights from the Krasnodar airport to the cities of Russia, CIS and far abroad countries. There are 3 railway stations with 60 trains passing through the city every day (in summer time there are more trains in twice). The federal highway M4 "Don" connects the city with Azov and Black Sea coast and Rostov region. There are also airport and river port in Krasnodar.

On Kuban river there is navigation of river transport into the water arear of Azov Sea. As a result for 2005 year Krasnodar became the winner of the competition "The best municipal formation in Russia" in the nomination of "Infrastructure of municipal formation".

Modern Krasnodar is an industrial centre. About 50 thousand people work at 127 big, medium and numerous small industrial factories or more than 11 per cent of all people occupied in city’s economy. Food industry, machine-building, metal-working production and light industry sectors play the main role in industrial structure. Municipal industry is also represented with enterprises of electrical energy industry, construction materials, chemistry and petroleum chemistry, microbiology and other.

Due to its geopolitical, climatic, natural and economic potential Krasnodar city takes an important place among other municipal formations of Krasnodar region and it is one of the most attractive cities in Southern Federal District. Krasnodar is the most attractive city for investment in Krasnodar region and the whole Southern Federal District as well. During 2009-2010 years the investments into basic capital of the city economics were estimated in over 200 billion rubles.

The capital of Kuban is universally recognized as scientific, educational and cultural centre. 230 doctors of sciences, professors and 1300 masters of sciences work and over 100 thousand of students study in 35 state and non-state higher education establishments. Agricultural field has six scientific-research institutes and most of them are federal ones.

The Russian centre of functional surgery on gastroenterology, regional centre of homeopathy and the first in Russia Center of chest surgery are situated in Krasnodar. On the base of Krasnodar municipal diagnostic and treatment association there was created the complex of centres of specialized course outpatient treatment.

There are Krasnodar Botanical garden and forest park in the city.

Due to the unique geopolitical situation of Krasnodar region on the South of Russia, Krasnodar city became one of the most important cities of Southern Federal District and yearly it is confirmed by results of its social and economic development.