The flag of Krasnodar 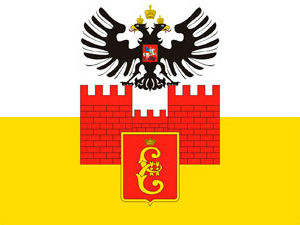 The banner of the municipal formation Krasnodar city presents square cloth having correlation of the width to length 2:3 consisted of two horizontal equal stripes of yellow color beneath and white color up. In the centre of the banner there is red fortress wall with two towers; the black two-headed eagle crowned with three imperial crowns rest upon them; on his chest in dark red scutcheon the horseman in silver armory turned to the left on the horse made of the same metal strikes the black winged serpent with the spear. Above there is a dark red heart shield, bordered with a thin golden rim, in which there is crowned yellow monogram of Catherine II.

The representation of the fortress wall symbolizes Yekaterininskaya fortress in the banner. Yellow monogram of Catherine II means that the city was named in her honor.

Yellow color is the color of wealth; it’s the symbol of the might, belief, nobility, constancy, solidity.

White color is the color of purity, honesty, nobleness.

Red color is the symbol of love, courage, boldness, generosity.

Black color is the color of wisdom, prudence, constancy.