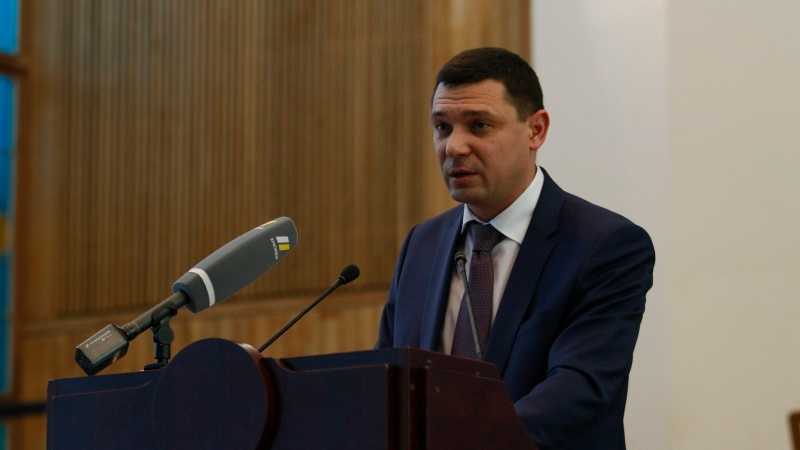 Today at the 65th session of Board of Directors the results of Kuban capital economic branches over 9 months have been reviewed. Acting Head of Krasnodar Evgeny Pervyshov made a report on the achievements of three quarters of this year.

— The capital of Kuban keeps the positive dynamics in a major part of indices: total amount of the produced industrial and agricultural goods, turnover in retailment and catering, the rendered services in transport sector and communications. Volume of produced goods by large and medium-sized industrial enterprises has increased almost by 12 billion roubles in comparison with the same period of the past year, — Evgeny Pervyshov said.

The 65th session of Board of Directors was held in municipal concert hall. It was attended by Chairwoman of Krasnodar City Duma Vera Galushko, Deputy Heads of Krasnodar, Heads of urban district administrations, representatives of trade unions, Directors of enterprises, organizations and establishments of the capital of Kuban.

In his report Evgeny Pervyshov summed up the results of social and economic development over the period January-September 2016, made an analysis of situation in industry, construction sphere, agroindustrial complex, told of local budget execution and plans for the construction of social infrastructure facilities.

In particular he noted that, the largest and medium-sized enterprises occupied in processing industry have produced goods and provided services to the amount of 46 billion roubles. Companies producing and distributing electric power, gas and water have output to over 58 billion roubles.

Evgeny Pervyshov spoke about achievements in agriculture. He informed that the harvesting cereals and grain legume crops in suburban farmsteads has been successfully accomplished. Agricultural producers threshed the grain to amount of over 56 thousand tons and collected fruits and berries one and a half times greater than in 2015 — over 13 thousand tons, vegetables — over 14 thousand tons. Also this year the production of milk has increased by 15%, livestock and poultry — 8%. Thanks to the relaunching of Krasnodar poultry farm, the production of eggs was increased by record 36 times.

Acting Head of Krasnodar paid special attention to the situation in construction sphere.

— Volume of works performed by large and medium enterprises in the branch amounted to almost 22 billion roubles, growth rate — 104 percent. Over the period 9 months more than 1 600 ths square meters of residential housing have been commissioned in Krasnodar, — Evgeny Pervyshov stated.